Beginning from First Principles. Understanding the seismic characteristics of scaled accelerograms requires us to visit the mechanics of earthquake processes. By visiting the earthquake mechanics, per the author’s opinion, we can gain insights into the physics of the scaling process. Such a comprehension of the physics will further enable us to inform, in a better way, about the safety of infrastructure under strong earthquakes by attributing some character to the scaling procedure. As discussed in the Previous Post, earthquake safety assessment of infrastructure may routinely rely on scaling accelerograms.

Earthquake Mechanics. The earthquake process and its effects, as summarized in the figure below, can be divided into three components: (1) rupture on the fault plane and generation of seismic waves; (2) propagation (which leads to dissipation and attenuation) of seismic waves through the medium surrounding the fault plane; (3) reception of the seismic waves at a recording station in the form of an accelerogram. 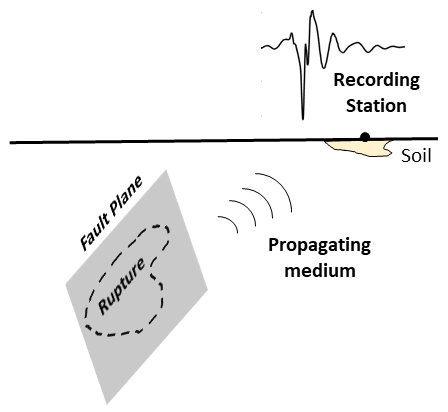 Observing the Representation Theorem in the above figure, it is noted that ground motion at a site can be kinematically determined once the fault rupture (or slip over the fault plane) is known. This fault rupture, as seen in the figure above, is first multiplied with fault’s elastic coefficients and unit normal (which represent the strength and geometry of the fault, respectively) to convert displacements to forces. Next, the composite of terms (1) and (2)–which is in terms of a force–is multiplied with the impulse response of the propagating medium to give the ground motion at the site. This impulse response term (3 in the figure) is the ground motion observed at the site for an unit force applied on the fault plane, and it is also called the Green’s function. It is, therefore, intuitive that the product of the Green’s function and the force applied on the fault plane (product of terms 1 and 2) will give us the required ground motion. These three terms which makeup the Representation Theorem are discussed in further detail.

(1) Fault Strength and Geometry. Strength of a fault is described by the elastic properties of the rock medium surrounding it. Elastic properties, in Structural Engineering language, are the Young’s, Rigidity, and Bulk moduli. However, these moduli can be mathematically derived from what is called the Elasticity tensor. The Elasticity tensor is a fourth order tensor describing the relationship between material stresses and strains in all three directions. Elasticity tensor depicts the strength of the fault in the Representation Theorem. Geometry of the fault-plane is described by a unit normal vector. The unit normal is a vector normal to a plane whose magnitude is unity. The figure below presents the elasticity tensor and the unit normal of a fault-plane. As will be seen in the Next Post, both these quantities play a key role in setting up the problem of developing the accelerogram amplitude scaling seismology. 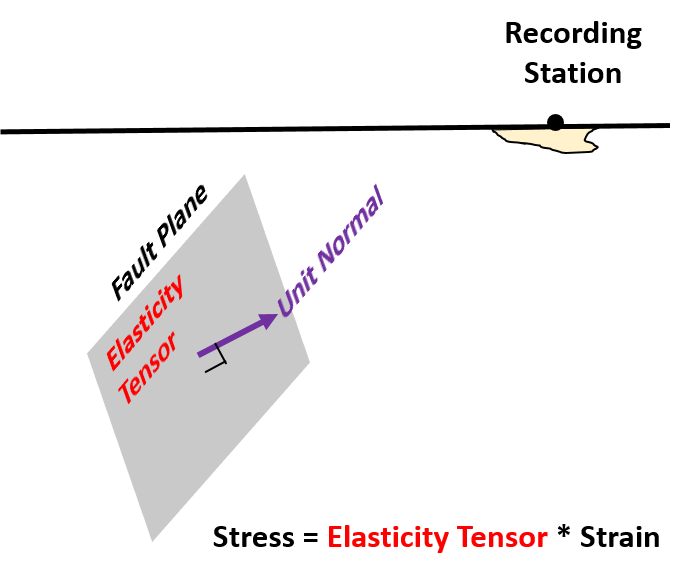 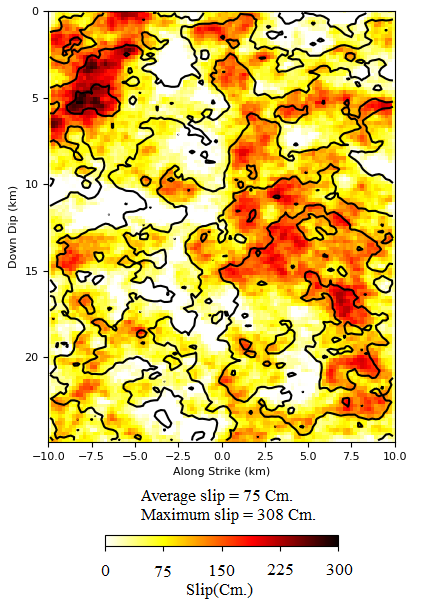 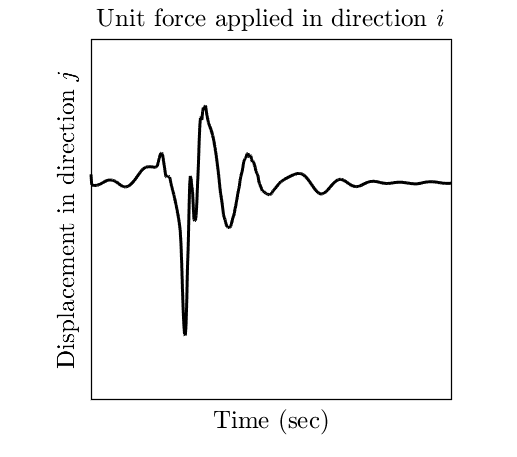 In the Next Post, the terms which make up the representation theorem will be investigated in relation to understanding the seismology of accelerogram amplitude scaling.

To cite this page: Dhulipala, S.L.N. (2018) What is the Seismology of Accelerogram Amplitude Scaling? (in review)

This work is licensed under a Creative Commons Attribution-NonCommercial 4.0 International License.